The Sweet (Fleeting) Life of Strawberries 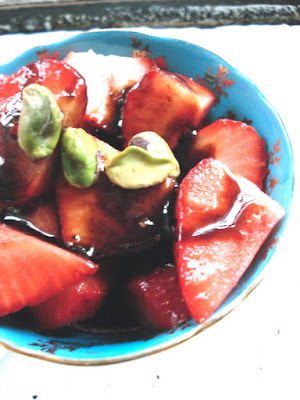 For me strawberries signal the start of summer. They remind me of twin popsicles and water sprinklers. For a split second I am eleven again, just finished with school for the year and ready for a strawberry shortcake kind of summer, light and filled with whipped cream clouds of hope. As adults, we don’t always get those kinds of summers. Sometimes we get summers when biscuits taste almost arid and it rains a lot, or at least enough to make dry biscuits simply intolerable.

Vanilla Black Pepper Balsamic Strawberries
1 cup balsamic vinegar
1 vanilla bean, split and seeds scraped out
Black pepper, to preference
Heat balsamic vinegar with vanilla bean seeds and pod on low until reduced by a little more than half. Discard pod.
Makes about 1/2 cup or so, depending on how far you reduce.

The slower you reduce the better. If you reduce the vinegar too quickly it will remain fairly sharp. It took me about 30 minutes or so to do this. Chef Thomas Keller has a recipe that calls for 2 cups balsamic to be reduced over 2-3 hours. I am sure the result is glorious, but I have yet to make it this far and find it unlikely, at least in the summertime, that I will get there anytime soon.

Garlic, I Lost You To the Summer Wind 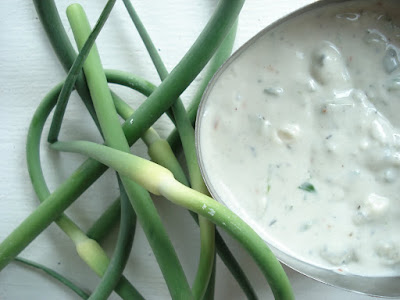 I’ve been looking forward to home grown garlic since I planted it last fall. Garlic requires a bit of forethought, as it isn’t supposed to be ready for harvesting until summer is in full swing. A 10-month commitment: and so I planned and planted.

Garlicky Gorgonzola Dressing
3 ounces Gorgonzola (or other blue cheese)
1/4 cup Greek Yogurt
2 tbsp mayonnaise
1 tbsp sherry vinegar
About 1 garlic scape, finely chopped
2 chives, finely chopped
6-8 basil leaves
1/4 tsp red pepper flakes
Salt and pepper to taste (for salt I used about 1/3 tsp)
Combine all ingredients.
Yields about 1 cup.
Notes:
If you find raw garlic overwhelming you may want to start off with 1/2 a garlic scape and then add more to taste. Now is the time (late spring/early summer) to look for the scape at your local farmers' market. I've even seen it in grocery stores.
I used 0% Greek yogurt because it was what I had around and the dressing was great, but you could certainly use a higher percentage; I imagine things would only get better for you.
This dressing will be fairly thick, if you wish you could thin it out with more vinegar (or a little buttermilk); it would also be great as is as a vegetable dip.
Posted by A Plum By Any Other Name at 10:30 PM 4 comments:

The Crab: Good with Mayo, Bad with Monogamy 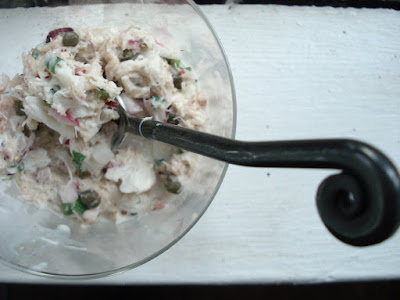 Mating for life: an interesting concept. I’ve always found it intriguing the variety of species that will stick with one partner. (This is one odd top ten list, so brace yourself.) 1. Swans. 2. Termites 3. Turtle Doves 4. Black Vultures 5. French Angel Fish 6. Penguins 7. Albatrosses 8. Bald Eagles 9. Wolves 10. Worms

Crab Salad
12 ounces shelled crab (fresh or about 2 cans if fresh is unavailable)
2 scallions, sliced
2 radishes, diced
3 sprigs each of tarragon, lemon verbena and dill, minced
1 tbsp capers
2 tbsp mayo
Juice of one lemon
1 tbsp grainy mustard
Pinch cayenne pepper
Salt and pepper to taste
Combine all ingredients.
Serves 4.
Notes:
The bite of the radishes and scallions is a great contrast to the sweetness of the crab, but if you are looking to tone down the intensity you could always substitute more mellow vegetables, like red peppers and celery.
The crab salad was great on top of greens to help balance out the debauchery of the past weekend, though putting it on a brioche bun would be decadent.
Blue crabs are currently fairly sustainable. For more info on sustainable seafood check out Monterey Bay Aquarium.
Posted by A Plum By Any Other Name at 1:04 PM No comments:

You Say Potato, I Say Paesano 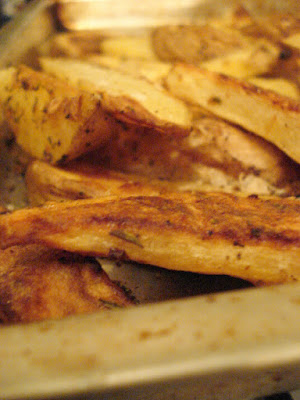 The poor potato. It has sure put up with a lot over the years. First, it was attacked by blight in the mid 19th century, during the infamous potato famine in Ireland. Then, in the mid 20th century (and again in the late 20th century), a flock of bacon-eating Atkins dieters attacked the potato, in a last-ditch attempt to shed pounds. I don’t know which is worse: a moldy, spore-spreading fungus causing massive starvation or doughy carb-deprived potato haters. I imagine in both camps people were pretty irritable.

The russet potato has a high starch, low moisture content, which makes for great oven fries.