Carrot Salad with Mint and Dates, and Old Man Guavaberry 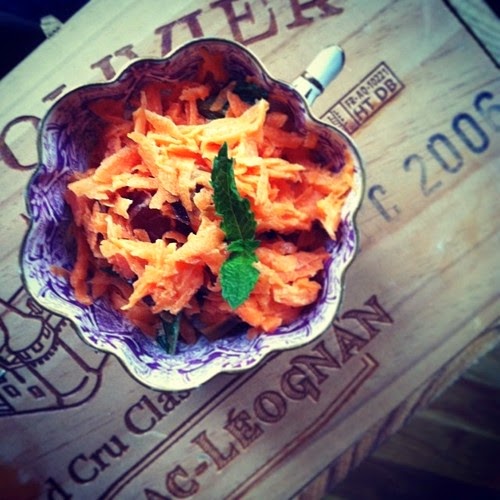 Carrot salad is something you’ve probably had with redundancy.  Likely alongside picnic potato salad or waffle fries.  Often upstaged by something piggy.  Hardly deserving of a special introduction.

Unless it’s good enough to voluntarily make three times in a week.  Especially if two of those times occur on vacation.  Then it might be worthy of a little discussion.

I first made this salad out of arguable necessity on the island of Sint Maarten.  There we drank a lot of mojitos and Caribs, and ate chicken and rib platters saddled with four starch sides at a “lolo” called Sky’s the Limit, because a man named Elvis said so.

It was the best thing we ate on the island.  You probably know where I am going with our second best.  We were lucky to have a small kitchen in our room and access to a grocery store that stocked carrots as big as hammers.

We also had mint, leftover from the mojito-making.  And dates, leftover from Christmas that my mother thriftily packed in her suitcase.  And orange juice, with a little booze in it, leftover from my plane ride to the island.  Because I do not like to fly.

Throw in some lime, because it’s a crime to go without it when drinking Carib beer.  And some mayo, because eating a tuna sandwich with a little sand in it is pretty much a necessity on any beach vacation.  And the rest, as they say, is history.

When we weren’t gushing about our good fortune of Creole chicken plates and Elvis, we were eating this salad.  Because it is very, very good.  The dates add a caramel depth that the more traditional raisin addition leaves out. The citrus punches up the carrot, while the mint adds a peppery, grassy edge.

The splash of rum is really a tribute to Old Man Guavaberry, the distillery on the island.  I brought a bottle home because, well, who can resist something like that?

To be sure it wasn’t the ocean—or our special island hammer carrots—I made the salad again this week.  It was just as good as it was in the Caribbean at happy hour.  The view isn’t quite as nice now, which you can clearly see below.

But it's not so bad seeing carrot salad and a bottle of Old Man Guava at home, either.

Carrot Salad with Mint and Dates

1 bunch of carrots (about 5 large or 7 to 8 small), peeled and shredded
juice of ½ a lime
1 to 2 tbsp orange juice
4 to 5 tbsp of mayo
splash of rum, bourbon, etc. (about a tsp or two)
1 to 2 sprigs of mint, leaves taken off and roughly chopped
8 to 10 pitted dates, roughly chopped
pinch or two of red pepper flakes
salt, to taste

Place the shredded carrots in a bowl and add remaining ingredients; stir well.  Taste and adjust seasoning. (For the ingredients given in ranges, start with the smaller amount and add more as needed.)

Notes:
-There is a link above explaining a “lolo,” but essentially it is a small roadside BBQ joint.  I highly suggest reading about Sky’s the Limit too.

-This is definitely a salad with a carefree island attitude; it’s easily adjustable.  The hardest part is the shredding.

-I’m sure you can leave off the booze.  But it’s fun to add a little vacation in. 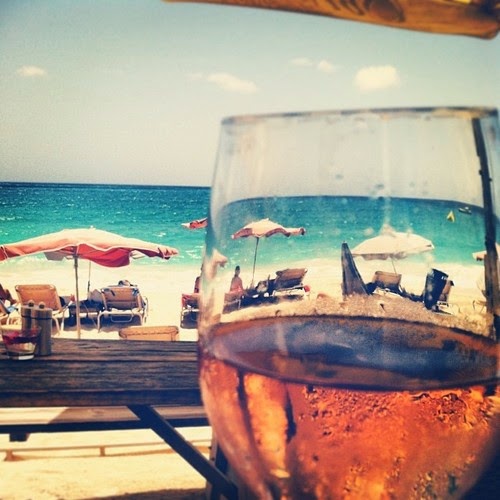 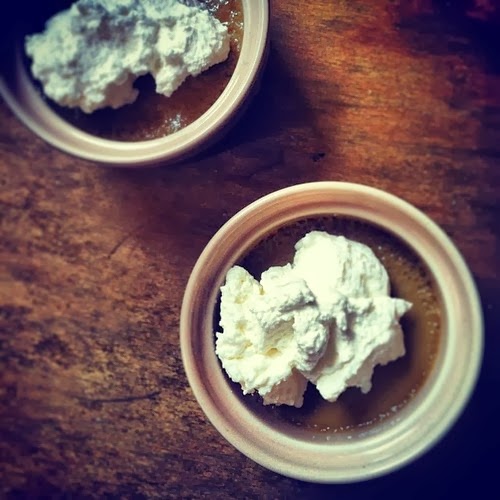 Let’s see.  Where to begin?

Much has happened since we last left off.  I’ve moved, suffered a terribly sad breakup, a gladiatorial chest-rattling ailment, and a two-hour midterm on microbes.

Instead of feeling incredibly weepy for myself, I come here today with an offering of pots de crème for the universe.  Essentially, this is pudding.  But pudding so good it has silenced rooms.  And I’ve yet to see it last longer than a minute or two in any human’s presence.

I’ve made the recipe a few times—once with muscovado and later on with plain old brown sugar.  If you do not have the former do not be dissuaded.  In either case, it’s well worth the pint of cream.

The result is more custardy than you might expect—heavy cream and egg yolks will do that.  It’s not tooth-achingly sweet either, as some butterscotch desserts can be.  I also highly recommend leaving the cloud of whipped cream on top unsweetened.  It wonderfully balances the rich, toasty caramel that lies beneath.

The recipe conveniently makes four dinner guest-sized portions.  Except when you are only having two dinner guests.  Then you conveniently have a double ration for the cook.  Or perhaps you walk the ancillary portion down to your friends at the neighborhood wine shop? Who devour it instantaneously in your presence.  And might even swear a little.

The point is, no one who has seen the likes of these pots de crème has been able to resist them.  Nothing but praise.  Dishes scraped clean.  So tuck this recipe away for a day when you’ll need a little extra oomph.

Because all is fair in love, war, and pudding.

Set your oven to 300 degrees and make sure you have a rack positioned on the middle level.  In a small saucepan, combine 1½ cups of heavy cream with the muscovado (or brown sugar) and salt.  Bring to barely a simmer on medium heat, stirring occasionally until the sugar is dissolved.  Remove from the heat.

In a medium saucepan, combine 6 tbsp of water with the demerara sugar over medium heat, swirling the pan occasionally, until the sugar gets browned and bubbly (it helps if you don’t use a dark-colored pan, so you can easily check the hue).  You’ll want it almost chestnut in color (this should take about 5 minutes).

Remove the browned sugar liquid from the heat and slowly add in the cream mixture, whisking to combine.  In a large bowl, whisk together the egg yolks and vanilla and then add the hot cream mixture in a slow, thin stream, continuously whisking until combined.

Set a fine-mesh sieve over a glass measuring cup and pour the custard through (you’ll need a 1-quart size or you’ll have to pour it in batches).  Skim off any foam with a spoon.

Select a baking dish that is large enough to hold four ramekins (or other oven-proof containers) without touching.  Fold a dishtowel to line the bottom of the dish.  Place your ramekins in the pan and divide your mixture among them.  Place a piece of aluminum foil over the top of each to help prevent a skin from forming.

Slide the baking dish into the oven and pour hot tap water into the dish until it is halfway up the sides of the ramekins.  Bake until the custard is set around the edges but still slightly jiggles in the middle when shaken (about 40 minutes).

Carefully remove the ramekins (they will be hot) and let cool on a wire rack (discard the foil).  The custard will continue to set as it cools.  Meanwhile, whip the remaining ½ cup of heavy cream until soft peaks form (you can do this by hand or with a stand mixer).  Refrigerate both the cooled pudding and the whipped cream for a few hours.

Divide the whipped cream among the puddings and serve.

Notes:
-These are best the day they are made.

-I don’t have any tried-and-true suggestions for a demerara sugar substitution.  You might try using the Sugar In The Raw packets you see at coffee shops.  This is turbinado sugar and isn’t as deeply molasses-flavored but may be a good last-ditch effort.
Posted by A Plum By Any Other Name at 8:01 AM 5 comments: