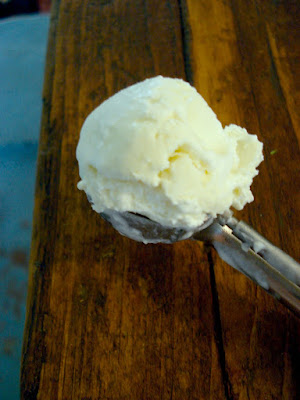 Confession time. I have a few bad habits.

1. I am a plate licker. 2. Very few things anger me more than overcooked egg yolks. 3. I have a substance abuse problem with ice cream. Phew. That felt good.

Recently, I attempted to bring some order to this chaos of sugar and cream, once and for all. If I can take away the scarcity of cucumber ice cream—I reasoned—perhaps the "situation" will self correct. Round one: not too shabby. It was light, refreshing and subtly cucumber-y. The perfect antidote to the recent heat.
Rest assured, this will not be the last time I play with fire. The cucumbers are too good right now not to continue. Thank god the scientific community is still conflicted on the merits of food addiction. This buys me some time before I’m hauled off to the Betty Ford Center. Between you and me, let’s just stick to calling it a bad habit. Cucumber Ice Cream
5 cucumbers, peeled and seeded, cut into chunks (save the peel from 1-2 cucumbers)
1 cup heavy cream
1 cup half and half
1 cup plus ~2 tbsp sugar
2 tbsp lime juice
4 tbsp lemon juice
Kosher salt to taste
Purée cucumber and strain out liquid, pressing the pulp with rubber spatula to extract all cucumber liquid. Set liquid aside. Heat cream and half and half with sugar and cucumber peel(s), just long enough to dissolve the sugar. (The cucumber peels will make the ice cream more green.) Add cucumber liquid and lime and lemon juice to cream mixture and strain again. Add salt. Chill, preferably overnight. Freeze in an ice cream maker, according to instructions (it should take about 30 minutes to freeze).
Makes about 5-6 cups (depending on how much you sample, ahem, prior to the freezing)
Notes:
- The ice cream was oddly fantastic with a splash of rose water and a sprinkling of smoked sea salt on top; I'd suggest adding them straight into cream mixture before freezing it.
- Also, I am not ashamed to say some friends and I experimented with topping the ice cream with ground pink peppercorns. This would be another tasty way to feed your addiction.
Posted by A Plum By Any Other Name at 9:04 PM 23 comments: 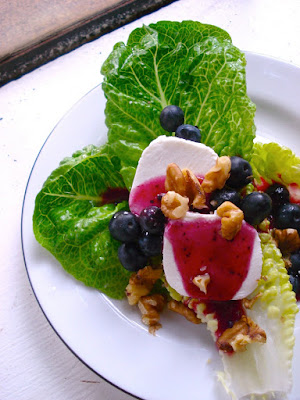 Blueberry Vinaigrette Over Goat Cheese and Greens
Blueberry Vinaigrette
1.5 cups blueberries
1 lime, juice and zest
1.5 tbsp sherry vinegar
1 tbsp maple syrup
3 tbsp hazelnut oil
About 1/2 tsp salt
Pinch of black pepper
Pinch of red chili flakes
2 lavender flower buds (about 1/4 tsp)
Makes 1/2 cup (about enough for 2-4 salads, depending on if they are starter or entree salads)
Blend blueberries, lime juice and zest, and sherry vinegar in a food processor. Strain out blueberry skins using a strainer, pressing down on the blueberries with a rubber spatula to release all of their juice. Whisk blueberry juice, maple syrup and oil together and season with salt, pepper, red pepper flakes and lavender.
For the salad:
Simply pour the blueberry vinaigrette over greens, sliced goat cheese and fresh blueberries; top with walnuts.
Notes:
I strongly dislike coming up with recipes for meals that are approximations. Use your judgement regarding how much of each of the salad components you use. You can't go wrong.
I added lavender because I had it around; you don’t need it, but its floral quality worked well with the goat cheese.
Posted by A Plum By Any Other Name at 9:42 PM 16 comments: 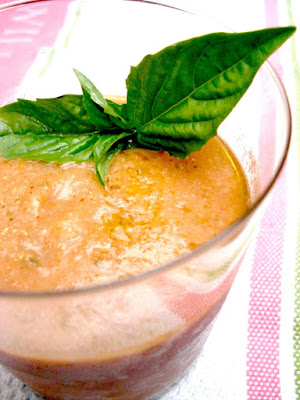 I am mourning a loss. Scratch that: two losses. I lost my goldfish, Claude, of a year and a half, this past week. All that knew him loved him; he was a fish among humans. There is still some debate over his death; some hypothesize heat exhaustion, while others claim involuntary fish slaughter and others, yet, fear he died from loneliness over the long July 4 thweekend. I am not kidding.

Andalusian Gazpacho
1 peeled cucumber, chopped
1-2 seeded habanero peppers, chopped
4-5 tomatoes, chopped
1 small red onion, chopped
3 cloves garlic, diced
Salt to taste
1 peach
2 cups brioche, 1" cubes
1 lemon, juice plus zest
2-3 tbsp sherry vinegar
1/4 cup basil leaves
1/4 cup olive oil
Salt, pepper and red chili pepper to taste
Ice cubes
Mix first 5 ingredients; salt liberally. Let sit 30-60 minutes. Drain excess water. Squeeze peach to release its juice over brioche; let sit. Blend tomato mixture with brioche in a blender or food processor. Add peach pulp, lemon zest and juice, sherry vinegar, basil, olive oil and additional salt, pepper and red chili flakes to taste. Add ice cubes (I used about 8; this will chill the gazpacho and help emulsify it). Chill.
Yield about 5 cups
Notes:
I tried to strain the mixture after I was done blending, but my sieve was too small; it still was good.
I know this isn't a traditional Andalusian gazpacho, but it is what I was working with this day. This is a recipe to definitely taste as you go to get the seasoning right.
Posted by A Plum By Any Other Name at 10:05 PM 7 comments: 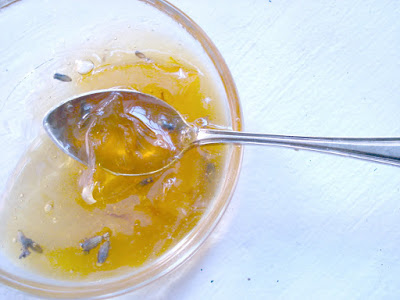 Life has officially mellowed into a blithe, carefree July; the summer sun has a way of bleaching your worries away. It’s probably good practice to carry a breezy July attitude with you, through all of the seasons of your life. Reactions to any problem seem less severe; maybe it’s the heat.

I’ve started to think that pretty much anything life throws at you can be confronted with one of two statements: A) Oh well. B) We’ll see. Have you burnt the roast? Oh well. Afraid you’ll spend the rest of your life alone, spoon-feeding marmalade to the clowder of cats you swore you’d never acquire? We’ll see. Turns out, you can’t plan your life ‘perfect’: it will go exactly the opposite.

Lemon Lavender Marmalade
2 pounds of lemons (about 6, preferably organic because you will be eating the peel)
5 cups sugar
5 cups water
Pinch of salt
1.5 tbsp lavender flowers (fresh)
1 tsp vanilla extract
Thinly slice your lemons and then cut them in half. Place them into a pot and add the sugar, water and salt; bring to a boil. Let the lemon mixture sit overnight. The next day, add half your lavender and let simmer for about 2 hours, stirring occasionally. Then, bring the marmalade up to a boil and stir frequently for about another 30 minutes. Skim off any foam that forms. If you have a candy thermometer (you lucky person, you) you know the marmalade is done when it is around 220 degrees. You can also place a little marmalade on a plate and stick it in the refrigerator for a few minutes to see what the finished consistency will be: you want it to be firm, not too runny or too hard. Add the rest of the lavender and vanilla extract.
Makes about 5 cups.
Notes:
As luck would have it, I gave myself a deadline to make this recipe that happened to fall during the heat wave, when temperatures reached 100 degrees; this was a true labor of love. Maybe it was the 2 plus hours I spent boiling lemons in a non-air conditioned studio apartment, but making this marmalade was oddly cathartic.
Recipes will say you can let the marmalade sit at room temperature overnight. I am fairly certain these proper marmalade-making souls are sane enough to have the modern luxury of air conditioning. All bets are off when it's over 90 degrees; I refrigerated the marmalade overnight.
Since I despise the process of canning (maybe it's the lack of air conditioning), I just froze the extras. I can neither confirm, nor deny, that the amount of sugar used is appropriate for canning.
If you don't want to go through the trouble, you can order this marmalade straight from the Cape Cod Lavender Farm. I was not going to shell out 8 dollars for a jar.
Posted by A Plum By Any Other Name at 8:35 AM 10 comments:

Here's Looking at You, Pistachio Butter 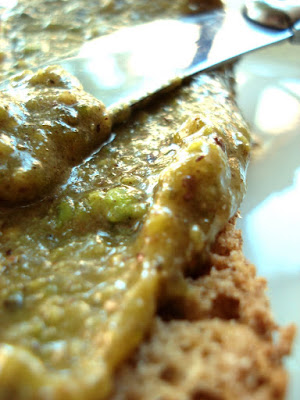 There is something truly special about riding in trains. As I write this, I am currently en route via train, homeward bound for upstate New York, for a wedding. As a romantic, I find travel by train both exotic and old fashioned. And I suppose this is true for most of the luxuries I hold dear to my heart.

I froze the rest of the pistachio spread. I imagine it will be lovely on toast or a warm croissant. I may even try filling dates with it, though it might need a hint of something acidic to balance out the sweetness of the dates. If you wrapped the stuffed dates with prosciutto it probably wouldn’t be the worst thing in the world either.