The Sound of It, Whole Wheat Duck Egg Fettuccine 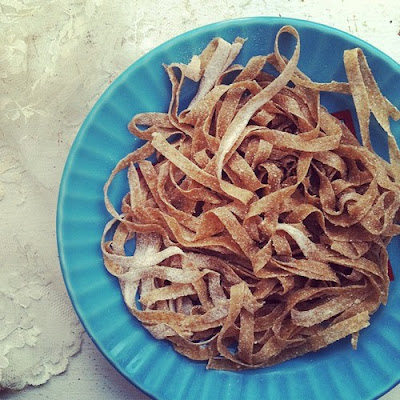 If I have a few unspoken for hours on a Sunday, I’ll make pasta.  Fettuccine is the preferred meditation.  Something about the thick strands. Or maybe I just find attempting angel hair causes the release of too many four-letter words.  That level of delicacy often has me swearing like a sailor.

I scooped up some duck eggs at a recent Formaggio Kitchen trip.  Duck.  A four-letter word much more suitable for pasta.

It’s entirely unnecessary to use such eggs of grandeur in this setting.  But there is something lovely about the sound of duck egg pasta.  And—if you’ll allow me to get overly precious—the whole wheat flour used here is from Misty Brook Farm, a local.

It also requires less than a minute of cooking once tossed in a pot of water.  And it made for the most incredible Tuesday night dinner, paired with linguiça, chickpeas, a little garlic and sherry vinegar, and a shaving of pecorino.  A roll this pasta was born to play.

Place the eggs in a food processor and add the flour and salt and pulse until it comes together and forms a rough dough (you may need to add a little water to soften it, I added about 3 tbsp). The dough should hold together when pressed into a mass and should be soft, but not sticky.  Wrap it in plastic wrap and let it rest about 30 minutes.

Divide the dough into manageable portions (4 to 6 pieces) and pass each piece through a pasta roller or press.  (I use a Kitchen Aid attachment and start at “1” and then pass the dough through until setting “6.”)  You want it as thin as you can get it without tearing.

Cut into strands (I used the fettuccine cutter attachment).  Hang the strands over a clothes drying rack, broom handles, chairs, whatever works, to let them dry out slightly.  (Dust whatever you are using with flour to prevent sticking.)

After the pasta becomes a little less soft and flexible (though you should still be able to bend it), dust it with cornmeal and shape the strands into little nests.  At this point you can store them in the freezer for awhile or in the fridge in an airtight container for up to 3 days.

Notes:
-If you don’t have duck eggs, you should be able to substitute 4 chicken eggs.   Add a little flour or water if the dough is too sticky or too dry.  (Usually I don’t have to add any water with this ratio if I’m using 3 cups of all-purpose flour.)

-The linguiça was also from Formaggio.  Incredible.
Posted by A Plum By Any Other Name at 10:27 PM 4 comments: 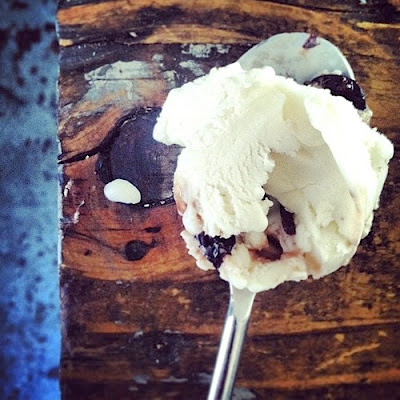 “Check out that view,” I thought.  (Sarcasm dialed up.)

This has more or less been my experience looking for apartment rentals the past few weeks.  So forgive me if I don’t stay long today.  I’ve been cruising the Internet like an online dater hoping to stumble across someone that doesn’t resemble a rapist.

But right now I’m just happy to have the ice cream.  Its slick, creamy consistency has a cheesecake essence—just a bit goaty-er.   The goat’s milk adds tang to balance out the richness that comes with shaving cheese into milk and cream. The plumped up cherries do their part too, chewy and tart with a lingering note of cassis, which I added mostly because the dried cherries I was using were a little sad.

The result is one of the better ice creams I’ve seen in a while.  Wish I could say the same for apartments.  But for now I have good goat ice cream.  Hope scooped, buoyed by sarcasm.

ingredients for the base

ingredients for the boozed-up cherries

Mix about 2 tbsp of the milk with the cornstarch to make a slurry.  In a medium saucepan, combine the remaining milk, cream, sugar, corn syrup, and pinch of salt and bring to a rolling boil over medium heat; boil for 4 minutes.

Strain the goat’s liquid once or twice to remove any bits of cream cheese or gouda that didn’t get fully incorporated; pour the liquid into a metal bowl.  Place the metal bowl in a larger bowl filled with ice and allow the liquid to cool before refrigerating (until fully chilled, ideally overnight).

While the base mixture is cooling, prepare the cherries by placing them in a medium saucepan with the framboise (or other alcohol) and about ¼ cup of water and heat on medium to medium-high heat.  (You may wish to add a pinch of salt here too.) If the liquid dries up, add a bit more water.  Once the cherries have softened, place them in a small container and pour the crème de cassis over them while they’re hot.  The cherries will continue to soak up the booze.  Cover and refrigerate until ready to use.

When the goat mixture is fully chilled, churn it in a frozen ice cream machine base until thick ribbons start to form and it pulls away from the sides of the container.  Pack it in a freezer-safe container with a tight fitting lid.  You’ll want to alternate the cherries and the ice cream, so pack a little ice cream then a layer of cherries and repeat about 2 more times.  Cover the top with parchment paper and freeze until firm, at least 4 hours.

Notes:
-The cherries were already sweetened in their dried form, so I didn’t add any sugar.  Taste your cherries and adapt as needed. With this sort of thing you can always adjust as you go.

-The goat’s milk is from Oak Knoll Dairy and I used a midrange gouda called Yodeling Goat.  I suspect you could use any type of goat cheese—in fact, a soft goat cheese would be lovely, even more tangy and grassy.  That might be up next.

-If you don’t have goat’s milk you could substitute whole milk for a more mild flavor.  The fat content is similar.  Just don’t use a low fat product or you’ll probably be sad about your ice cream.

-This ice cream keeps very well, we're talking about a month without ice crystals.
Posted by A Plum By Any Other Name at 9:21 AM 8 comments: 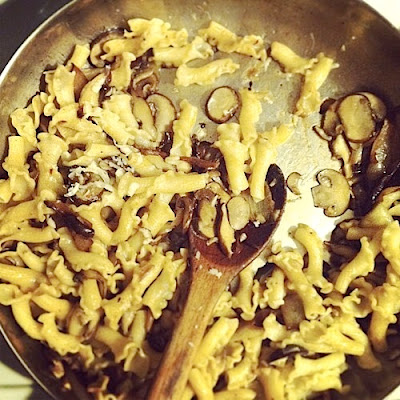 You might say I’ve been a bad Italian.  Though my last name hovers in ethnic ambiguity, my roots are green, white, and red.  Fresh off the boat, our original surname, Gelsomino, had its “o” cavalierly sliced off, like you would the butt end of a sopressata.

Growing up, my grandmother would buy boxes of tomatoes, which we’d can in her house.  In August.  As it approached 100 degrees.  Windows closed.  Blinds down.  Rickety old floor fan circulating the thick tomato soup air.  Hand cranked pasta was made in the kitchen and dried on white cotton sheets draped on couches in the living room.

We ate a lot of pasta.  So much so that we developed our own Gelsomin—no “o”—macaroni dialect.

Pa•sta fa•zool (pästä fäzōōl), n.: linguine dressed with tomatoes and white beans.  Used as a quick, complaint-free weeknight dinner made from the contents of a common Italian-American pantry and, more broadly, used in conjunction with drool-worthy stars as a metaphor for love. A species separate from the soupy version often served with cuff-shaped ditali. Variant (Ital.): pasta e fagioli

Co•va•dills (kävädëlz), n. pl.: shell-shaped macaroni with ridges and a nook for red sauce; typically served for Sunday dinner at grandma’s paired with braciole and escarole salad, from the garden.  Variant (Ital.): cavatelli

Despite all this, sometime in my mid twenties I stopped eating pasta regularly.  And that was that.  Until I decided that was enough nonsense.

Last week I—very happily—cooked macaroni (campanelle) resembling fluted trumpets.  First, I sautéed some mushrooms in butter and olive oil (plus garlic, always garlic).  And roasted onions and shallots, wedged with thyme, until their skins gave in and sweetened.  Everyone met in a sauté pan, joined with a heavy dusting of pecorino and a glass of Schiava Nera to sip, a light ruby wine that hovers pleasantly between a rose and pinot noir.

This is an entirely new place for me.  A place that pairs meaty mushrooms slicked in butter with sweetened slumping onions cloaked in balsamic and cream.  There’s no pasta drying on a couch per se, but, occasionally, there’s some strands draped over a broom handle or two.

It’s different from the pasta I grew up with, but I’ve come home again.

Set the oven to 425 degrees.  Peel and chop each onion and shallot into four or five wedges and place in a baking dish; toss with enough olive oil to coat the wedges (1-2 tbsp), season with salt and pepper, and add a tbsp or two of balsamic vinegar and a dusting of sugar.  Wedge in thyme sprigs.  Roast in the oven until the onions get soft and caramelized; start checking after 30 minutes (mine took 45).

Once the onions have started to soften and gather color, fill a medium saucepan with water for the pasta.  Season the water with salt and heat on high.

Heat a large sauté pan and toss in two tbsp of butter and a glug of olive oil.  Add in the garlic and cook about a minute, being careful not to burn it; add in the mushrooms, season with salt, and stir to help distribute the oil.  Let the mushrooms be for a few minutes so they can start to caramelize; if the mushrooms look dry, add another tbsp or two of butter; add in the sage leaves and stir gently.  When the mushrooms are tender and caramelized, remove the pan from the heat.

When the water boils, add in the pasta and cook until al dente (you want it a tad toothsome, as it will cook another minute or two in the sauté pan).

When the onions are fully softened and have browned, add in another splash of vinegar and enough cream to make a little sauce in the pan; return to the oven to cook another few minutes.

When the pasta has cooked, drain it (reserving about ¼ cup of the pasta water), and then add the pasta to the pan with the mushrooms. Remove the onions from the oven and add them to the pan as well (you may want to remove the thyme sprigs first).  Add in the pasta water and toss to combine.  Season to taste, though keep in mind the pecorino will also add saltiness.  Dust with pecorino, to taste.

Makes about 6 cups of pasta and sauce

Notes:
-The pecorino really brings the dish together.  Parmesan would also work well.

-You don’t have to be a slave to the amounts listed.
Posted by A Plum By Any Other Name at 8:06 PM 5 comments: