The Certainty of Mac and Cheese 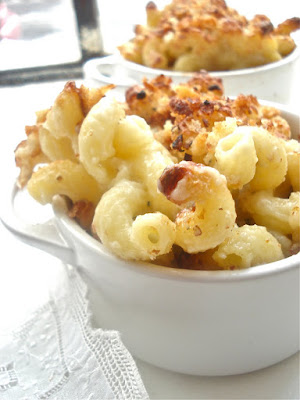 Some days I realize I have it pretty good, like when I have to buy cheese—a fair amount of it—“in the name of research.” There are also days when my life has me scratching my head: like when “taking a break from work” on Sunday meant doing my taxes. But let’s not talk W-2s. Let’s talk cheese.

This week, I wrote a food column about mac and cheese for South End News. The South End in Boston has a jewel of a food shop, South End Formaggio, with some (read: a lot of) impressive cheeses. My favorite from the weekend’s cheese jaunt was a local blue cheese from Jasper Hill Creamery called Baley Hazen Blue, named after an old military road in Vermont that George Washington authorized the building of.

The process of making Baley Hazen Blue starts off by milking cows first thing in the morning, when the milk has a lower fat content. After getting milked, the cows get to graze on green pasture (in the spring and summer, mind you: they live in Vermont). In the winter, they are fed hay and listen to jazz music. I am not kidding. Whether it’s their diet or their musical snack, this grassy blue cheese has a silky texture reminiscent of a chocolate truffle (and Chet Baker?).

I also bought a smoky raw milk toma, similar to a comté; and after a taste of the cheese and a look at Betty Sue and Lee Robie at their 6th generation farm in Piermont, NH, I was ready to rent a car and drive straight to the Robie Farm (especially because they also make ice cream, which not only features the milk from their happy cows but eggs from local chickens). While there was no specific mention of jazz, they did stress the importance of kindly treated animals.

So these cheeses, along with an emmentaler, made for quite a special mac and cheese: a dish that I’ve oddly developed quite strong views about. It should be made with at least two different kinds of cheese. Baked with buttery breadcrumbs. And while slices of tomato bruléed on top would be okay, I prefer that bacon, sausage, or any otherwise pleasant, yet debaucherous meats be left out of the equation on this one. For me, this dish is all about the cheese. And an elusive, corkscrew noodle called cavatappi: I will rarely make mac and cheese without it.

I suppose I should also now confess that I have a strong distrust of elbow macaroni. I’d like to say it was from the mac and cheese my mom served us growing up, made by melting Velveeta cheese with skim milk in the microwave. Truthfully, I don’t even remember if it was elbow macaroni that she used. Also, it was the 80’s. And I remember liking her mac and cheese; the memory makes me smile. I guess I'll still be scratching my head about this one too.

As far as I’m concerned, it’s hard to find bad mac and cheese, as long as you put some heart into it (and perhaps some jazz). I do think the local cheeses added a little extra oomph, though I can’t say for certain. As it is said, nothing is certain but death and taxes, though I’ll take mac and cheese in the meantime.

6 tbsp butter, divided
2 tbsp flour
2 cups whole milk
Pinch red chili flakes
Pinch nutmeg
1/2 pound macaroni
1/3 cup bread crumbs, fresh if possible
1 clove garlic, minced
2.5 cups grated cheese, variety (I used 1/4 blue cheese and the rest equal parts swiss and smoked toma)
2 tbsp parmesan cheese
Kosher salt
Pepper
Preheat your oven to 425 degrees. Melt 4 tbsp butter in a large pot and add flour. Cook for about 5 minutes on medium heat, careful not to burn the roux (flour and butter mixture); then add your milk, season with salt, pepper, chili flakes and nutmeg, and stir occasionally until mixture starts to thicken. Meanwhile, start to boil water in another pan for the pasta. Season pasta water with salt. When your water is boiling, add pasta and cook about 2 minutes less than the package states. While you are cooking your pasta, add your remaining 2 tbsp butter to a saute pan and add your garlic and saute about 2-3 minutes and then add bread crumbs, season with salt and pepper, and cook until your bread crumbs turn golden and crispy, about 3-4 minutes, set aside.
When your pasta is cooked, drain the water. Add your grated cheese to your thickened milk mixture (you've just made a bechamel sauce: ta-da!); toss in pasta and stir until well combined with sauce. Pour into a casserole pan, top with parmesan cheese and bread crumbs and bake until golden and bubbly, about 20 minutes or so.
Makes about 4 cups
Notes:
-I usually like a swiss, blue and cheddar cheese (or a "guest" cheese) when I'm making mac. The smoky toma did wonders and I'll be coming back for more.
-Pair this with a side salad of peppery arugula tossed in a mustardy vinaigrette and I'm a happy camper. (South End Formaggio had some tasty looking arugula too.)
-According to the Robie Farm website, South End Formaggio is the only place you can get their goods in Massachusetts.
Posted by A Plum By Any Other Name at 8:01 PM