Down the Barley Soup Rabbit Hole 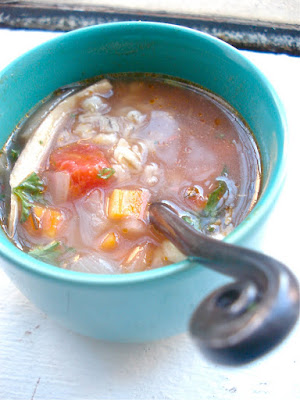 I’m late! I’m late! I’m late, for a very important date. Though I don’t have much time, I have enough to say that I think we are on the cusp of a rabbit explosion. Wait. Don’t go. Rabbits are not that scary: I promise. They’ve been, ahem, popping up all over the place. So go ahead, jump down the rabbit hole.

On the other side, you’ll find the likes of many notable Bostonians. Edible Boston recently ran a rabbit-friendly story. Barbara Lynch makes a braised rabbit pasta dish with olives and rosemary at Sportello. Toro serves up rabbit paté stuffed with pistachios. And Stoddard’s even does rabbit mousse.

While I realize this is not the context to convert the weary, I can say that rabbit tastes like the dark meat of chicken, but a little more of the earth. Consequently, it’s also less taxing on the environment. And though it was once considered peasant food, it ain’t cheap today. In fact, my rabbit cost me over 40 shekels, the beast. I scored some from Stillman’s Farm at the winter farmers' market in Somerville: it was worth every penny. The meals it made practically fell into my kitchen.

I decided to braise this rabbit similarly to the way I braise short ribs, mainly because I had some leftover port. So after I had a nice crust on the meat, into the pot went diced carrots, tomatoes, garlic, onions, fresh oregano, rosemary and port. A few hours later, some low and slow cooking turned out braised rabbit that fell nicely off the bone. The saucy rabbit then made for a wonderful base, atop a whole wheat pizza crust, with fresh mozzarella from Fiore Di Nonno (also from the winter market) and ricotta, along with some more fresh oregano. Next, came a stock out of the rabbit carcass, in the exact fashion of making chicken stock, and voilà: rabbit soup.

Down, down, down the rabbit hole I went. And I don’t think I’ll be coming back. Turns out, rabbit is as versatile as it is fecund.

So, in typical fashion (oh my ears and whiskers!), the rabbit is at it again. Prolifically giving life to many dishes and rapidly spreading throughout the menus of Boston, as well as becoming a welcome addition to my kitchen.

Rabbit Barley Soup
2 tbsp olive oil
1 onion
3 garlic cloves, minced
4 carrots, peeled and diced
8 cups rabbit stock (or chicken stock; both can be made with the carcass, in the same manner)
~1 sprig rosemary
~2 sprigs oregano
Salt and pepper
14 oz can chopped tomatoes
1/2 cup uncooked barley
Saute the onion, garlic and carrots with olive oil in a large stock pot. Add in stock and herbs. Season with salt and pepper. Let simmer about 20 minutes. Add tomatoes and uncooked barley and cook for about 60 minutes more, or until barley is fully cooked. Adjust for seasoning, as needed.
Makes ~ 2 quarts
Notes:
-This is a great leftover dish if you have some remaining rabbit to use up. I added ~1 cup braised rabbit meat to the soup and and am happily awaiting rabbit soup leftovers in my freezer.
-This is a recipe open to interpretation. It can easily be substituted for chicken.
Posted by A Plum By Any Other Name at 9:03 PM